The County was organized in 1841 by a committee of pioneers, headed by Thomas Bullock who came to Walnut Grove (now Eureka) in 1835 from Versailles, Woodford County, Kentucky, his birthplace. The County and its first County Seat, Versailles, were both named by Mr. Bullock in honor of his boyhood home. Court was held in a private home.

Abraham Lincoln was one of the early-day lawyers who practiced in the Versailles Court. In 1843 the County Seat was moved to Hanover (now Metamora). A new Courthouse was built from home products. The bricks were burned from native clay, and the lumber cut and split from the adjacent forest.

The Hanover Company donated the ground, and the cost of the building was $4,400, paid for during the first 2 years. The old Courthouse, built at Metamora in the early 1840s, was purchased by the State of Illinois during Governor Len Small's administration; and is maintained as a memorial in honor of Abraham Lincoln, who tried many cases at the County Seat. Within its old walls are stored valuable relics contributed by the Woodford County Historical Society.

The old Courthouse was abandoned when Eureka won the county seat in a contentious 1894 vote. The present Courthouse was then erected in 1897-1898. It was constructed of grey sandstone and was lit throughout by electricity for a cost of $60,762 by H.G. Bruning of Havana, Illinois. In 1904 the tower clock, manufactured by E. Howard Clock Company, was installed in the cupola.

A board of 3 commissioners conducted the County's affairs until 1855, when the townships were represented by a supervisor elected annually. In 1930 the present 4-year term came in vogue by a state law approved June 10, 1929.

Today the governing body of Woodford County is comprised of 15 elected officials, 5 from each of 3 districts of the County.
The current terms are still 4 years for all board members. 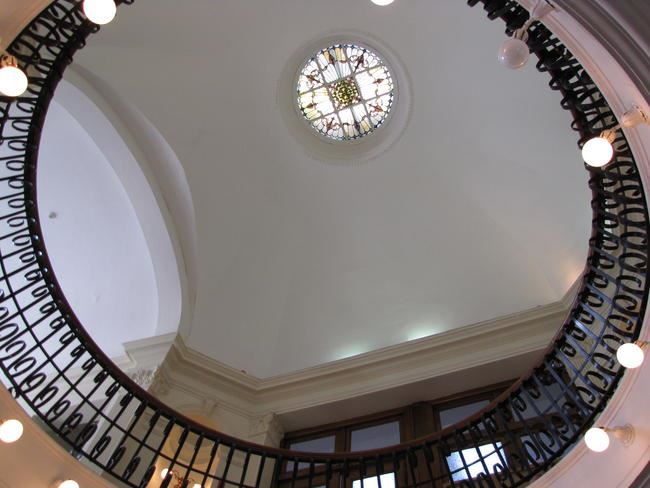